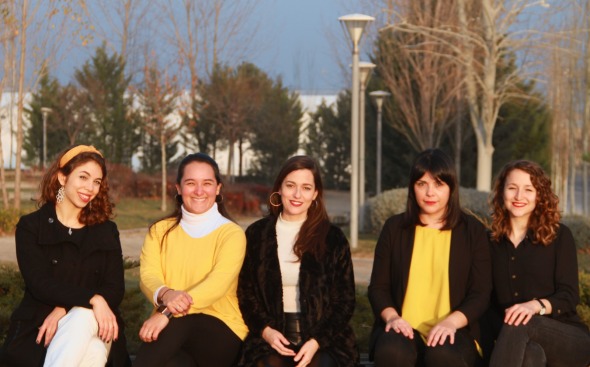 EGERIA is a female vocal ensemble that will show you that medieval music is not a thing of the past. We aim to break down the barriers of a repertoire relegated to oblivion and mistreated by history, and rediscovering for you, translating it into your contemporary context.

EGERIA reveals that medieval music is much more than what you have ever imagined: it’s a repertoire directly linked to the most fundamental essence of the human being. A completely polyhedral and holistic music that will, connect you with the heavenly and the earthly, the spiritual and the worldly, the visible and the invisible. You will walk the paths of love and pain, comedy and satire, politics and history, -with themes that not only do not move away from the current reality but also continue being inherent in life today,. with a musical language that’s going to surprise you. Because EGERIA and medieval music are cool and we invite you to witness it.

EGERIA is a pioneer ensemble, as it is the only emerging ensemble on the national scene constituted only by female voices whose repertoire is focused specifically in the Middle Ages, with no concessions to any other times or styles. The group was born with the intention of recovering and highlighting the historical and musical significance of some of the manuscripts but would soon expand its scope to other European repertoires. However, its aim has transcended this simple desire of «heritage recovery» to focus on the public, and what EGERIA offers is unique and personal to each listener. Is the unparalleled experience of discovering a repertoire that few groups dare to tackle, in an honest and close way, always based on the rigor of musicological research.

Its programs are a perfectly interlocked assortment of sounds styles, with carefully selected pieces according to consistency, versatility and dynamism. In addition, each repertoire is prepared to be performed a cappella and with instrumental accompaniment, always in favour of offering the best version according to context and space.

As an homage to the famous traveller who gives them their name, each EGERIA programme is designed as a «road map». Thus, EGERIA has been working on two different projects over the past year:

In Terras Despanya: this concert is a discovery of the sound landscape of medieval Hispania between the twelfth and fourteenth centuries, from Ars Antiqua to Ars Nova, through manuscripts such as the Codex Calixtinus, the Codex of Madrid, the Codex las Huelgas and Llibre Vermell de Montserrat, paying special attention to the polyphony.

This season, EGERIA is working on two new programs:

Ad loca sancta: a tribute to Egeria, the adventurer of endless curiosity, who was the first woman to visit the Christian Holy Places. During this tour, she compiled in detail her journey from Gallaecia (Hispania), northern Italy, the Adriatic Sea, Jerusalem, Thebes, Mesopotamia, Syria and Constantinople and recorded her experiences in the guide Itinerarium ad Loca Sancta. Like this exceptional woman, the expedition begins in the Holy Land. Crossing the European continent in a journey that goes beyond the religious as it also involves an introspective pilgrimage through the different human, spiritual, ethical, emotional and socio-political dimensions and emotions as an idiosyncratic reflection of the medieval man.

Gaude felix Francia: an ode to the centre of political and social power and the undisputed cultural capital of Europe throughout the Middle Ages. This journey will take you throughout the neighbouring country from north to south going over the scene of sounds developed over hundreds of years, between the ninth and fifteenth centuries, which undoubtedly marked the path that western music would follow almost entirely.